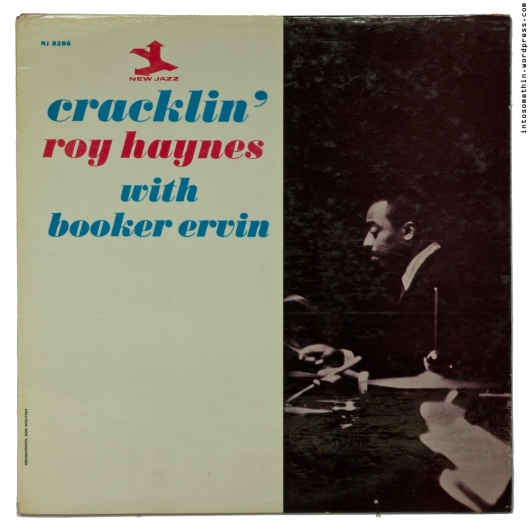 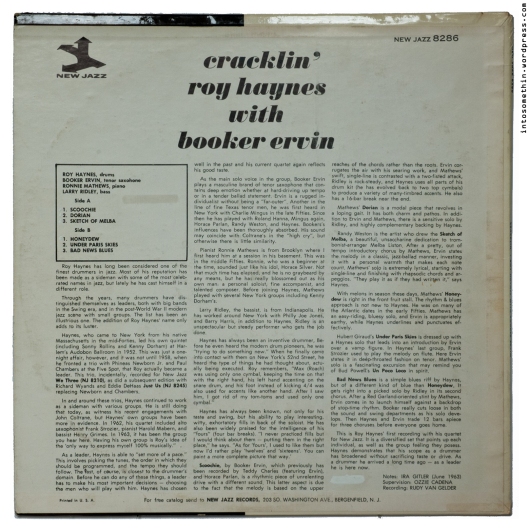 On many instruments, certain great jazz musicians are easily identifiable after but a few notes. This typically applies to trumpeters, saxophonists and even pianists but for a drummer to be instantly recognisable is a quality reserved for the privileged few. These include the likes of Art Blakey, Elvin Jones, Max Roach and Tony Williams – all of whom are relatively well known outside jazz circles. Roy Haynes is equally, perhaps more, distinctive but wider fame beyond the jazz cognoscenti tends to elude him. Haynes’ moniker “Mr Snap Crackle” describes his sound eloquently. His style is quick, clean and precise and he remains as active and potent as ever even though he’s into his nineties now.

Haynes’ discography as a sideman is extensive but his dates as leader are much more limited, especially during the golden era of the 1950s and 1960s. This plus the sheer quality of these recordings, make them highly prized by collectors, so I had to endure a lengthy pursuit to obtain a copy of Cracklin’, let alone one in prime condition. Few copies come on the market each year and there’s always the risk of picking up one with the significant background hiss that notoriously afflicts some original New Jazz pressings. This is widely held to be a result of the practice of using recycled vinyl that was deployed by label owner Bob Weinstock as a cost cutting measure. Plus it doesn’t help that Booker Ervin’s presence ups the desirability of this particular session.

Cracklin’ is a high quality package from a quartet of performers clearly familiar and at ease with each other. The programme offers something for almost everybody (except fans of latin tunes). We’re treated to some fingerpopping soul jazz, a beautiful ballad, some out and out blues blowing, a carefully structured compositional master class and one of the all time classics of modal jazz that is worth the purchase price all by itself. Sure, Haynes and Ervin get their names in lights but Mathews is no slouch at the keyboard or with the composer’s pen while Ridley gets several opportunities to display the merits of his solid bass tone.

The group flies out of the blocks with Ervin’s Scoochie, recorded elsewhere under variants of this title (for example as Skoo Chee on Horace Parlan’s On the Spur of the Moment LP). It’s taken here at an aggressive pace that gives us an immediate chance to appreciate Ervin’s distinctive tone. Next comes the epic Dorian, rightly regarded as one of the masterpieces of 1960s modal jazz. This track is a triumph for all involved from Mathews often overlooked compositional skills, through Haynes pinpoint accurate drumming and Ervin’s fervent blowing to Ridley’s tasteful bass solo. I could listen to this one over and over again and it was the track that set me off searching for this record in the first place. Side 1 closes with Randy Weston’s Sketches of Melba which offers the protagonists another route to display their talents via sensitive handling of this attractive theme.

Honeydew opens Side 2 with a brisk excursion into soul jazz territory. I can’t help but think that Herbie Hancock’s Watermelon Man, recorded the previous year, was a significant influence here – especially since Honeydew was paired with Dorian for release as a single (Prestige 45-264) by the parent record company, no doubt with an eye to the jukebox market. Now that would make an interesting curio for the collection! Haynes’ trademark drumming is as crisp as can be throughout this number and makes effective use a short breaks rather than an extended solo which would have overloaded this brief tune.

The penultimate performance is Under Paris Skies, which deceives the listener by setting off in one direction before establishing its evocative continental theme. To close, the quartet cuts loose with the in-your-face Bad News Blues. Everybody has fun and I especially enjoy the stop time interlude behind Ervin’s testifying tenor.

This is one of those LPs that lives up to its reputation among collectors: it’s all killer, no filler with not a weak moment across the whole date. 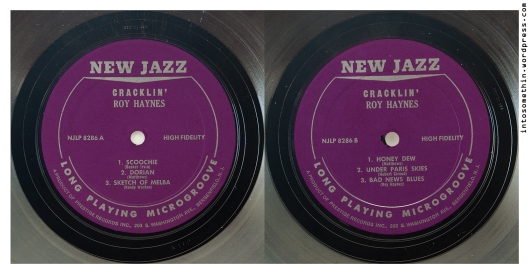 The cover has a lovely laminated front which, on arrival in my collection, was a little grubby. However, one of the blessings of laminated covers is that they respond well to some judicious cleaning with cotton buds and isopropyl alcohol. The rear cover isn’t laminated and had a couple of small typewriter correction fluid patches that detract from its otherwise lovely condition.

The controversial question is whether this example qualifies as a first pressing?

The difficulty here is that even within the scope of the New Jazz purple and silver labels for this specific record there are several variations in the wild: deep groove on one side versus non-deep groove on both sides, the typeface used for the artist, presence of “Side 1” or “Side 2” printed above the catalogue number, spelling “HI FIDELITY” versus “HIGH FIDELITY”. Add to that the fact that some copies are pressed on recycled vinyl (evidenced by the background hiss) and others, like mine, appear not to be and we’re faced with a knotty problem. The final factor here is chronology: this session was recorded in April 1963 and therefore released at some later date yet Prestige pulled down the shutters on the New Jazz imprint in 1964, which leaves little time for multiple pressings.

I have one theory that fits the facts: the possibility that several pressing plants were used simultaneously to press copies of this record – perhaps one plant on the East Coast of the USA, one on the West Coast and one somewhere in the mid-West as a way to limit distribution costs. There is a precedent for this with Columbia. If this theory holds good, then perhaps all these variations qualify as first pressings?

If you’ve got a copy of this record, maybe you’d be kind enough to share details and I’ll try to compile a chart of all the variations.

PS: I’ll add a rip of one of the tracks later in the week.