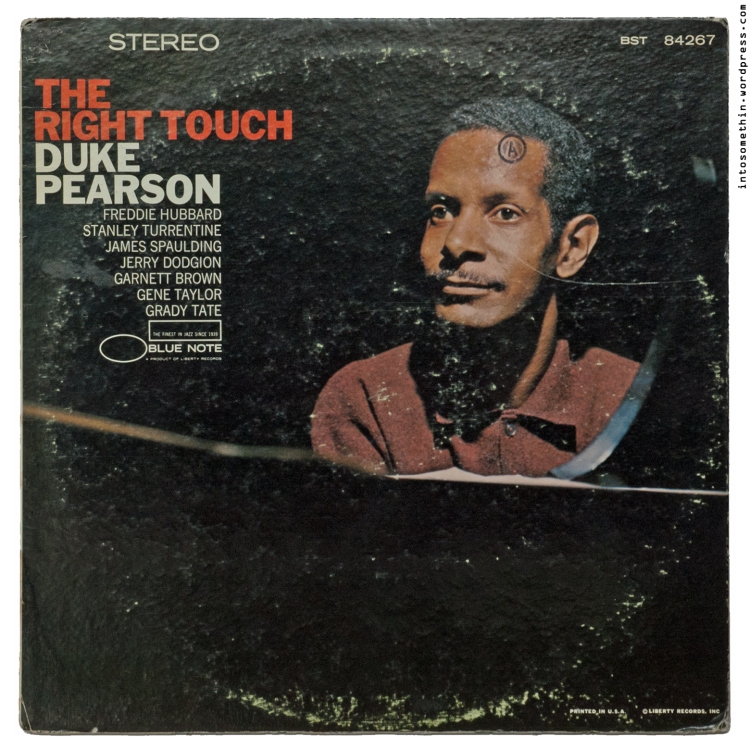 Duke Pearson was not the greatest pianist to record for Blue Note but he does have a special place in the label’s history. He first came to prominence as part of Donald Byrd’s group and appeared on a succession of notable recordings prior to his own debut as leader. But his place in the Blue Note pantheon was cemented by his role as A&R man, a duty he took over following the death of Ike Quebec in 1963. Pearson held down that job until 1971 alongside leading his own dates for both Blue Note and Atlantic, numerous sideman appearances and a healthy amount of work as an arranger. I get the impression that eight years of intensive activity must have taken its toll in the end. Pearson’s legacy is not just his own recordings but many under-appreciated Liberty-era Blue Note sessions that he organised.

The Right Touch is, for me, one of the high water marks of Pearson’s career. It illustrates all of Pearson’s strengths: genuine compositional ability (all the tunes on this LP were written by him), an ear for a catchy tune and a deft touch on the keyboard. Perhaps more than anything else, Pearson had a gift for arranging and he seems to have made a speciality of working with groups of six to ten musicians. I wonder what kind of a name he would have made for himself in the earlier big band era.

I first encountered this record because of the stand-out lead-off track Chili Peppers, which was a favourite on the UK jazz dance of the late 1980s and early 1990s. Nowadays, it’s found a new home as the theme tune of Cerys Matthews’ BBC Radio 6 Sunday morning programme, though I suspect few of her listeners are aware of the tune’s provenance. It’s one of several performances on this LP that give it a distinctly latin flavour – both in terms of titles and the music itself.

The closing track on Side 1, My Love Waits (O Meu Amor Espera), is an especially poignant tune with a languid bossa nova flavour and Los Malos Hombres provides another, more up-tempo, variation on the latin theme. It’s deceptively easy to listen to though its title, according to the sleeve notes, derives from its difficulty and is yet another example of the reverse psychology of jazz language – “bad” here meaning that you need to be a really good musician to perform this tune’s tricky fingering. Grady Tate gets a feature spot on this one and uses it to great effect. I get the impression that Pearson chose him mainly for his experience with larger ensembles though there are aspects of his playing here that echo the way Art Blakey propelled The Jazz Messengers.

My other favourite on this LP is Scrap Iron. It’s a complete change from the preceding latin number and offers instead a deep slow blues. Pearson’s piano and Turrentine’s tenor saxophone are both especially striking here as both go directly to the heart of the matter.

This record is another Blue Note Liberty-era selection from my trip to London earlier this year that bore the fruit of Lee Morgan’s The Gigolo. Like that acquisition, this example is also a case of a silk purse condition record hiding is a sow’s ear cover. And it goes to prove that the sound quality of Liberty pressings of 1967 wasn’t lagging too far behind the Plastylite pressings of the pure Blue Note years. This copy had a fair amount easily removed storage dust on the surface but not ingrained into the grooves. So, once cleaned, its Near Mint status quickly shone through. The cover, though, is in pretty poor shape with obvious ring wear, plenty of scratches and dents. Still, it’s done its duty and protected the all important vinyl!

So there we have it, a straightforward stereo first pressing of this record (though Cohen’s book doesn’t cover stereo first pressings after 84252, so I am making a modest assumption here). As with 16 other sessions of this period, Blue Note/Liberty produced some mono promo copies for US radio stations and those command a price premium.