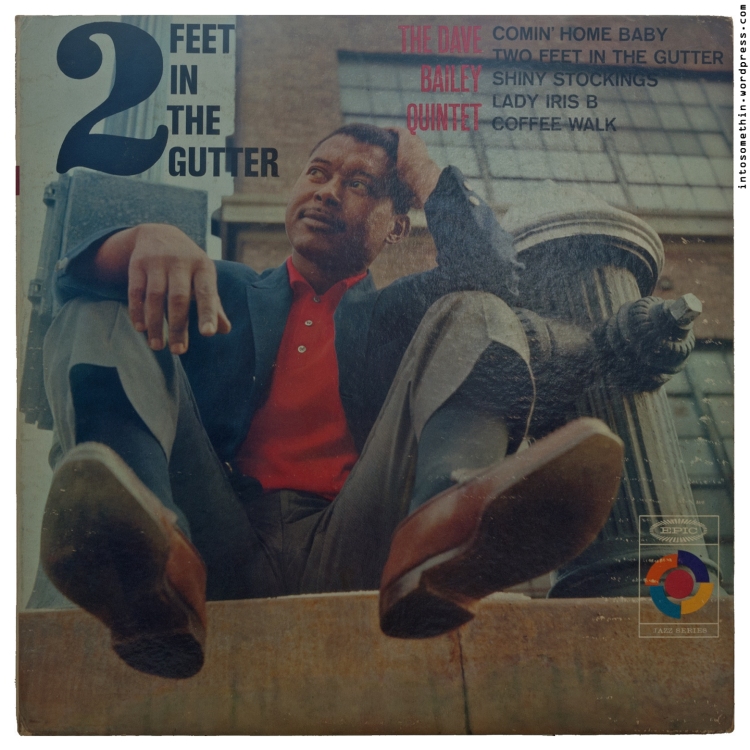 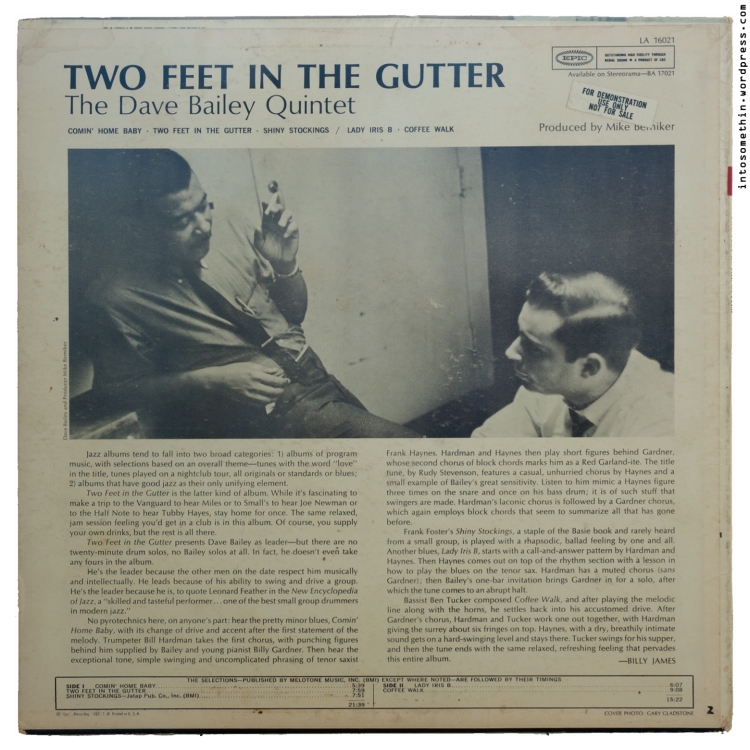 Serendipity is a fickle mistress. Sometimes she frowns on us collectors, other times she smiles. This record is a case of the latter. Earlier this year I had the opportunity to buy Bailey’s One Foot in the Gutter over the counter but I walked away from the deal because the condition of both record and cover weren’t as nice as as I wanted. As luck would have it, within a week, it’s sister volume Two Feet in the Gutter crossed my path, this time in much stronger condition.

A cursory analysis of Bailey’s discography would leave a casual reader less than impressed: just a handful of LPs under his own name culminating in this 1961 recording and a series of dates as sideman. Yet Bailey’s records typify the adage of the sum of the whole being greater than the parts. Bailey wasn’t a flashy drummer and didn’t hog the soloing limelight on his own records. His strength was his contact book and he had a talent for putting together groups of musicians who perhaps looked unpromising on paper but he knew them well enough to be confident that they would gel when teamed up. For those in the know, that’s what makes his LPs so collectible and satisfying.

On this occasion, the participants were a former Jazz Messenger’s trumpeter who somehow didn’t manage to follow the trails blazed by other occupants of that role; a virtually unknown pianist who would later turn organist; a solid citizen bass player with hidden depths and yet another tragic tenor saxophonist who was to die with his undoubtedly talent unfulfilled four years after this session. From these simple ingredients, Bailey was able to cook up a tasty dish.

Another factor is the success of this record lies in the fact that Epic was an imprint of CBS. I don’t know why CBS felt the need to release a series of jazz records under a different imprint but if this one is representative of them, I will be seeking out more. Put simply, the same record company support that famously went into all those sonically delightful Columbia six-eye pressings was on hand for this session. In essence, this is a Columbia six-eye record in all but label. The date was recorded at the celebrated 30th Street Studio and the record was clearly pressed by the same plant(s) used for Columbia records as evidenced by the matrix numbers stamped in the deadwax.

So what of the all important music? Things get off to a terrific start with the first ever recorded version of Comin’ Home Baby, committed to master tape here before the more famous Mel Torme and Herbie Mann versions. And, frankly, it trumps them both with ease. Next comes the title track from the pen of frequent Bailey collaborator Rudy Stephenson. A relaxed groove is established prior to Haynes’ on the money solo takes the spotlight pursued by Hardman and Gardner doing likewise. Side 1 closes with Shiny Stockings, made famous by Count Basie. To be honest, this is my least favourite performance on the LP because it doesn’t quite seem to fit the more modern feel of the other tunes.

The cryptically entitled Lady Iris B gets things started on Side 2. By this stage, the band seems to have really loosened up and hit its stride. The LP closes, as it started, with a Tucker composition, Coffee Walk. And here I can’t resist the temptation to quote the sleeve notes which observe “Hardman giving the surrey about six fringes on the top” when remarking on an effective repetitive phrase from the trumpeter’s solo.

Side one is non-deep groove and bears a stamped matrix number “XEM-55171-1A” which you may recognise as being in the same format as Columbia matrix numbers with an Epic yellow and black so-called strobe label. Side two is also non-deep groove and has the same style of Epic yellow and black strobe label plus a sticker that identifies this as a demonstration record. This time the stamped matrix number reads “XEM-55172-1A”. So this record qualifies as the equivalent of a coveted Columbia 1A/1A pressing. And the last vital statistic is a vinyl weight of 141g.

The cover is non-laminated and also bears a sticker that identifies it as a demonstration record. So everything here is consistent with this being a first pressing.

I acquired this record from a French seller who was selling an interesting lot that included several Bailey originals. I would have loved to buy them all but that would have blown my budget! As a final aside, this is another fine example of how these original pressings demonstrate sound quality that defies visual inspection. The surface of the record looks less than perfect but it plays excellently.