Here’s the second of three Adderley Quintet records I’m going to discuss as part of my extended Orrin Keepnews tribute. Within a year of their opening salvo In San Francisco, the band were in the studio (well, studios plural) to record again. The two dates that comprise this LP straddle the point at which Timmons elected to rejoin The Jazz Messengers with Harris being called up to occupy the still-warm piano stool.

The LP’s sequencing gives us listeners a chance to test our chops at correctly detecting the pianists because, for reasons lost to posterity, the tracks are not presented in chronological order. This is immediately apparent from the first track which features Harris rather than Timmons. Any thoughts that a personnel change would slow the groups momentum are instantly swept aside: in anybody’s book Work Song is a classic as witnessed by the fact that it continues to be played to the present day – including Gregory Porter’s version on his 2011 album Be Good using the evergreen vocals penned by Oscar Brown Jnr. Harris fits in from the off. He maybe less baptist and more bop than Timmons but, for this band, those are simply two sides of the same coin.

We get a chance to make the comparison on the second tune. Timmons’ Dat Dere is his own response to his earlier hit composition This Here and, again, is a tune that subsequently was to receive the Oscar Brown Jnr. vocal treatment. While I could have mistaken Harris for Timmons on the previous track, it’s much harder to mistake Timmons for Harris on this number. The mood changes for Easy Living, a ballad that provides both brothers with the opportunity to highlight their more sensitive sides. The band close Side 1 with Del Sasser, a rare compositional contribution from bassist Jones that sees the musical chairs game continue with Timmons reclaiming the piano stool.

A third pianist, Duke Pearson, enters the fray for Side 2’s opening number but as composer rather than performer of Jeannine. This tune is one of my favourite’s from this era and I’m hard pushed to choose between this studio version and the live version on which Pearson appears on Donald Byrd’s At the Half Note Cafe, Volume 2. The latter features great soloing from Byrd and Pepper Adams while the version under discussion here has the virtue great bass playing by Jones. Indeed, Side 2 offer ample opportunities to enjoy Jones’ performances. The band knocks off a Gershwin tune before closing out the LP with the most overt blues of the record – the title tune Them Dirty Blues. Adderley Senior takes centre stage for this number and virility is the word that springs to mind to describe his performance. It’s easy to see why, post-Parker, Adderley was the pre-emiminent altoist on the scene by the end of the 1950s. 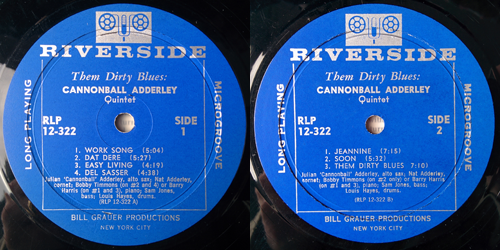 Side 1 has a blue and silver small (92mm diameter) reels and microphone deep groove “BILL GRAUER PRODUCTIONS” (no “INC”) label and a faint hand etched “RLP-12-322 A” matrix number. Side 2 has the same label with an equally faint hand etched “RLP-12-322 B″ matrix number. The vinyl tips the scales at 136g (in my experience Riverside pressings are lighter than Blue Note pressings of the same period) and is probably best described as being in VG+ condition due to a few audible scratches.

The cover is non-laminated and has the “235 West 46th Street New York 36, N.Y.” address. It’s in excellent condition except for the original owner’s stamp on the rear. To be certain that this is a first pressing, I’d expect to see the “553 West 51st Street New York 19, N.Y.” address but there were plenty of anomalies, so who knows?