This record is my first purchase of 2015 and has barged it’s way to the front of the queue. There are musical reasons for this promotion but there are also collecting reasons which I want to get off my chest first. While bidding on this record, I also took an interest in two other eBay auctions running at the same time. Both of them proved to be a source of frustration but for differing reasons.

The first was a near mint condition copy of Dusk Fire by the Don Rendell/Ian Carr Quintet. For those of you unfamiliar with this record, it’s one of the rarest, best and most sought after Brtish jazz LPs of the 1960s. As such, well preserved copies of this record sell for painfully high prices with Popsike reporting an average price of over £400 with top condition copies going for double that figure. I had no intention of bidding at these prices and was simply sitting back with my popcorn to enjoy the view. The bidding reached £335 with over eight hours to go and then, much to my surprise, stopped dead with no last minute flurry. Now that’s the kind of price that would make me gulp and think very hard before bidding but, given how auctions for this record typically go, I am left with a latent feeling in the back of my mind that I may have just missed my best chance ever to get this record. In a final twist of the knife, it turns out the seller actually lives only a few miles from me!

The second was a copy of Roy Haynes’ Cracklin’ with purple New Jazz labels (co-incidentally from the same seller as the Booker Ervin that is the main subject of this posting). This record is high on my wants list and moreover the seller was based in the UK, so I stood to avoid significant shipping costs if I won the auction. Therefore, I did my market research, formulated my bidding strategy and set up a snipe bid. So you can imagine my annoyance when I discovered that my snipe didn’t fire because of a “network connection error” but, worse still, the winning bid was lower than my snipe. In mitigation, the sniping service I use is free (so caveat emptor) and the winning bidder may have had a higher maximum bid waiting in the background. But it’s still frustrating.

And so to the main subject of this posting. It strikes me that there’s a well worn template for reviewing Booker Ervin records: the reviewer begins by saying how he first heard Ervin as a member of Mingus’ group and typically cites one or more favourite tracks or LPs; this is followed by some lament for Booker’s early death at the age of 39; next comes a reference to the tenor saxophonist’s legacy of recordings often with a mention of his work on Prestige and the “Book” series in particular before finally alighting on the record under consideration.

I won’t, indeed can’t, follow this route for the simple reason that I haven’t listened to much Mingus. And what little I have heard has not left me in a position to recognise that I might have heard Ervin. Indeed, The Freedom Book is, to my knowledge, my first encounter with Ervin. In fact, it’s also my first encounter with pianist Byard and drummer Dawson too. Bass player Davis is another matter completely because I know him from Bobby Hutcherson’s Dialogue among others. Sometimes, you’ve got to give something new a try – especially as a jazz fan – because there’s so much out there to discover. Without risk, there’s no reward and I’m delighted to say that The Freedom Book does indeed offer reward. But it’s not the kind that you’re going to get from a couple of casual listens, especially if you’re used to a diet of standard hard bop or soul jazz.

I often wonder what thought processes go into the sequencing of tracks for an LP. I get that it makes sense to start off with an uptempo number to draw in listeners but, in this case, the opening track on Side 1, A Lunar Tune, is probably the most challenging on the whole record for a first listen. Instead, my recommendation would be to flip over and begin at Side 2, which opens with the LP’s highlight and context setter: A Day to Mourn. This session took place less than a fortnight after the assassination of John F. Kennedy and this track is the quartet’s potent emotional response. It alternates between sorrowful slow passages and swinging interludes; a bittersweet combination of mourning an untimely death and celebrating a life well lived. It also gives an immediate sense of what these four musicians are all about.

Ervin’s tenor sax has a distinctive tone that he seems to be able to manipulate across a range of feelings at will. One moment it’s redolent of the blues; a moment later it exudes the whiff of a mysterious North African souk. Byard’s piano style is hard to pin down. Across the LP it moves inside and outside, sometimes sounding quite traditional but an other times introducing very modern dissonance. On bass, Davis is no surprise to me: he’s elegant, wiry and tactile as he moves up and down through the full range of his instrument. But the revelation for me is Dawson on drums. He produces a range of timbres on A Day to Mourn that have me wondering if he’s forsaken the sticks for using his hands directly on the skins at times. And the second track on Side 2, Al’s In is clearly intended as a showcase for Dawson. Over the course of an extended solo, he explores his whole kit with verve, subtlety and pliancy. The penny dropped only when I read the sleeve notes: at the time of the recording, Dawson was based in Boston where he taught drums at the Berklee School and numbered Tony Williams among his students.

Having assimilated Side 2, I was ready to tackle Side 1 armed with a better understanding of the group’s musical vocabulary. The first track, A Lunar Tune, comes flying out of the blocks with Ervin stating the gnarly theme before a breakneck solo. Then everybody else gets airtime in a variety of ways. Next comes Randy Weston’s ballad Cry Me Not which is all about Ervin’s unique tone. The final cut on Side 1, Grant’s Stand, starts out seeming like the most conventional tune on the record with Ervin dropping honking clues to his Texas tenor upbringing. Things change as soon as we get to Byard’s solo though: here things get fully post bop as the pianist throws the kitchen sink at it and Davis follows up with his best solo of the date. Throughout Side 1, Dawson eschews the opportunity to solo in favour of providing wide ranging ways to keep the pulse going and prompt the soloists to further efforts.

One final note: by late 1963, Rudy Van Gelder had perfected recording for stereo. This means this record is a treat for the ears. Sure, Ervin’s tenor is out to the left with Dawson’s drums biased to the right and the piano and bass haunting centre stage. Yet the soundstage isn’t artificially wide and I get the feel of ths true positon of the musicians, especially when I close my eyes. Plus it’s all topped off with the slightest hint of reverb on the horn. Delicious! 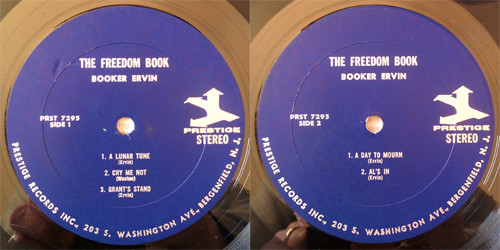 From a collector’s perspective, this record would have needed to have the black and silver fireworks labels to be a stereo first pressing. However, from an audiophile perspective, there’s an argument that this slightly later (but still original) dark blue/silver labels pressing is preferable because there’s a lower chance of recycled vinyl causing the dreaded hissing. Listening to this copy backs up that theory – the vinyl is gratifyingly quiet apart from a few low level pops in the quieter passages that don’t impair my enjoyment.